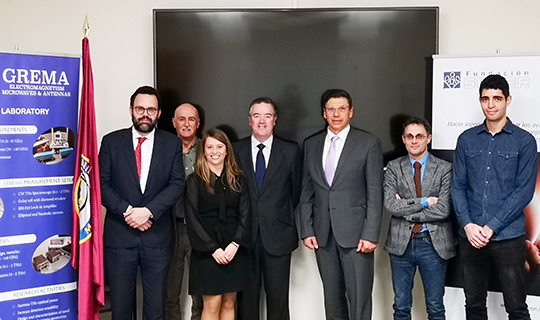 This technology will be applied in fields as diverse as biomedicine, for the detection of skin cancer and other use in diagnostic imaging; meteorology, for better and less costly prediction of climate change and natural disasters; and in astronomy and cosmology, to discover the origins of the Universe by measuring cosmic microwave background radiation.

Madrid (Spain), 19 February 2020 – The SENER Foundation has signed a collaboration agreement with Carlos III University of Madrid (UC3M) to develop a photon-counting receiver working at room temperature in order to measure extremely weak millimetre and submillimetre waves; a task that will be carried out by the UC3M Signal Theory and Communications Department. The agreement will last three years.

After the signing of the agreement, the President of the SENER Foundation and Vice President of SENER, Andrés Sendagorta, stated that “the support of this research project by the SENER Foundation is a very clear materialization of its foundational objectives, of the search for scientific knowledge and its application to improve people’s lives. Furthermore, it is a way of promoting the relationship with the University, in order to advance in a joint work in effective and efficient projects”.

On his part, the Vice President for Science Policy of the UC3M, Juan José Vaquero, thanked the SENER Foundation for its support of this project and highlighted “the importance of creating links between universities and companies to promote an industrial network in which technology transfer is transversal in its applications, as well as an option to retain the talent of our young people in Spain”.

Detecting and generating radiation in the millimetre and submillimetre waveband (from 30 GHz to 800 GHz) is highly complicated using current techniques. At present, the techniques coming closest to this frequency range are either microwave or optics. For microwave technology, the frequencies are very high; furthermore, the low energy that can be detected in this range limits the performance of optical technology. Therefore, developing a technology that meets the needs of the millimetre and submillimetre waveband is crucial for many areas of science and technology.

All the experiments carried out are based on receptors that must be cooled to almost reach the minimum achievable temperature of -273 ºC. These receiver cooling systems make it hugely difficult, both technologically and in terms of cost, to make receivers capable of carrying out these experiments.

Innovation of the project

The innovation of this research lies in the fact that, since there is no need for cryogenic conditions and we can work at room temperature, we can obtain a small and light signal receiver (the dimensions of which may be similar to those of a conventional smartphone), making it easy to use in applications where the use of these devices is either unfeasible or exponentially increases the complexity and cost of such devices, such as space probes for observing the Earth, astronomical sources or diagnostic imaging devices for diseases.

The device that will be produced as a result of this research will be able to be applied in three major areas: biomedicine, climate change and weather forecasting, and astronomy and cosmology.

In the area of biomedicine, it can be used to analyse living tissue –in a non-invasive and harmless way– to detect cancer or potentially carcinogenic cells through imaging. This can mean simpler, painless and early detection of skin cancer (fundamental in the prognosis of this type of disease). Similarly, this technology can be used to control and monitor people with diabetes, in the early diagnosis of diabetic foot.

With regard to the study of climate change and the forecast of natural disasters, this technology will enable Earth observation images to be created, revealing specific meteorological phenomena, such as explosive cyclogenesis and storms, and the imminent occurrence of natural disasters, obtaining further and earlier information on this type of event. This additional information will allow meteorologists to better predict the generation and behaviour of atmospheric phenomena, establish better and more reliable predictive models and anticipate their effects.

In the field of astronomy and cosmology, experts need highly sensitive signal receivers that capture very weak signals, such as those coming from the hypothetical Big Bang, the purpose of which is to obtain further information about the origin of the Universe. At present, we have receivers that detect this type of signal, but they have their limitations: the technology they use is highly complicated, bulky and costly. Furthermore, they have to work in cryogenic conditions (in temperatures close to absolute zero, equivalent to -273 °C) to prevent the signal from being contaminated by other sources such as our own galaxy, generally called foreground emissions. This new device would allow us to detect these weak signals, in many cases imperceptible to conventional receivers, and furthermore, it would do so by eliminating the difficulties involved in cryogenics, both when used on Earth and when sent on space missions.