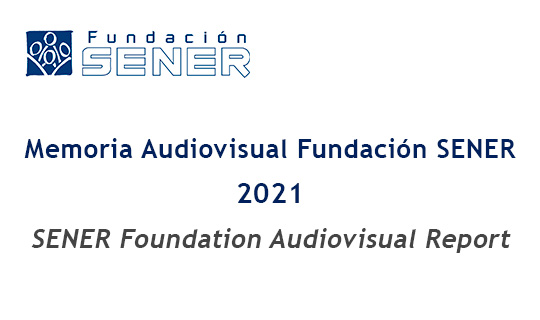 Madrid, 13 July 2022. The SENER Foundation has published an Audiovisual Report on the activities performed in 2021 in an effort to compile the most significant initiatives carried out by the company in the most recent financial year.

The new members of the Board of Trustees of the SENER Foundation, activities involving the promotion of scientific research, support for R&D projects with universities, and the launch of the “Challenge for Science” project to encourage young people to pursue scientific and technical careers are just some of the initiatives reviewed in the audiovisual document.

It also goes over the Rafael Izquierdo Award for Solidarity, which is presented by the Association of Civil Engineers through its Caminos Foundation. The award acknowledged the work done by the SENER Foundation’s volunteers, who were the focus of the nomination.

On a related topic, in the area of promoting and supporting scientific research, the SENER Foundation continued to support the Universidad Carlos III in Madrid in the development of a room-temperature millimeter and submillimeter wave receiver, the results of which could have applications in the fields of astronomy, meteorology and biomedicine.

Similarly, two agreements were signed with the Universidad Politécnica de Madrid to support two more projects; https://www.upm.es/the first one involving the creation of smart traffic signals; and the other focused on the development of ultra-thin, flexible and ultra-light solar cells to capture energy more efficiently than current cells.

Partnerships with other entities

It also sponsored the “Brussels Challenge” of the Brussels Expedition, organized by the Dale Candela association, with the aim of promoting research to alleviate amyotrophic lateral sclerosis (ALS) and raise awareness about the situation of people who are affected by this disease and their families.

In the field of cooperation, the actions set out in the agreement signed with the NGO Engineering for Cooperation-Lankidetzarako Ingeniaritza (ICLI) and the Universidad de Piura were completed in terms of supporting the literacy and technical training of the people involved in the granulated cane sugar production chain. Similarly, SENER staff continued its volunteer program and conducted an engineering study to improve the technical aspects of the cane sugar production process.

Promotion of scientific and technical careers

In 2021, the SENER Foundation launched the “Challenge for Science” project, which seeks to promote scientific-technical careers among kids and teens. This project is carried out with the SENER Group, whose employees introduce engineering, technology and science to kids in schools by presenting them the challenges these engineers face in their daily lives.

This project is being done in collaboration with the Spanish Foundation for Science and Technology, which is part of the Spanish Government’s Ministry of Innovation and Science. It has also received the STEAM Euskadi Sariak seal, presented by the Department of Education of the Basque Government and Innobasque, the Basque Innovation Agency.