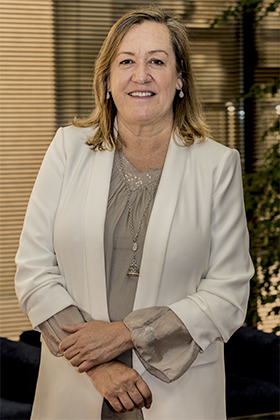 Itziar Urrutia is SENER’s International General Manager. Born in Bilbao, Itziar studied architecture at the Polytechnic University of Madrid’s Advanced School of Architecture and holds a Master’s degree in Management from the Instituto de Estudios Superiores de la Empresa (IESE). She led the Valencia and Bilbao divisions of SENER, where she worked in all four of the SENER Group’s business areas: Aerospace, Renewables, Power, Oil and Gas, Infrastructure and Transportation and Naval.

She represented SENER as a member of the Board of Directors of Innobasque, she was a member of the Science Advisory Committee of the Basque Council for Science, Technology and Innovation, and she has collaborated with the Industry and Transport Council of Tecnalia Corporation.

In 2013, she received the Business Award from the Association of Entrepreneurs and Managers (AED) and, in 2017, she was named one of Spain’s 100 Female Leaders.