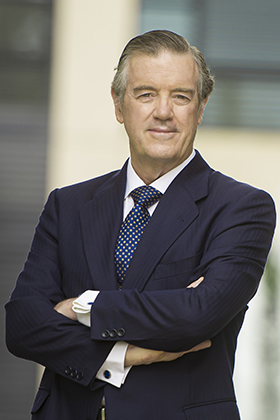 Andres Sendagorta is President of SENER Group. He holds a diploma in General Management from the Institute for Higher Business Studies IESE (Universidad de Navarra, Spain). He is a member of the Steering Committee of Instituto de Estudios Bursátiles (the Institute for Stock Market Studies), and the President of the Basque Family Business Association AEFAME.

Lieutenant Commander and Harrier jet pilot on board aircraft carriers (U.S. Navy and Spanish Navy). In 2009, he was awarded the Grand Cross of Naval Merit with white decoration by King Juan Carlos I. Andrés Sendagorta’s professional relationship with SENER was forged, first, as a Director (at the Board of Directors) and ten years later, since 2000, as Vicepresident of the Group. In 2018, he was appointed President of the SENER Foundation.