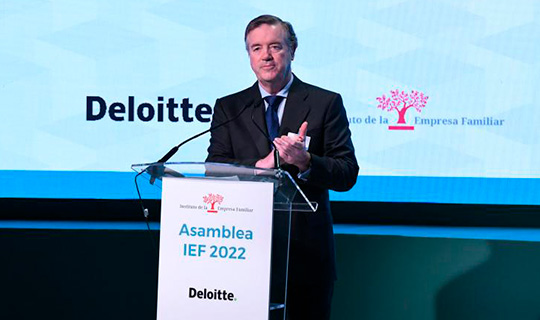 Madrid (Spain).- The President of SENER Foundation and President of SENER Group, Andrés Sendagorta, was elected this morning as the new President of the IEF, the Spanish Family Business Institute during the IEF’s Members’ Assembly, in whose closing session the Secretary General of the Partido Popular and spokesperson of the GPP, Cuca Gamarra, and the Minister of Inclusion, Social Security and Migration, José Luis Escrivá, also participated.

The Presidency of the IEF has, according to the statutes of the organization, a non-renewable term of two years. Andrés Sendagorta thus becomes the fifteenth president of the Institute. The Assembly also thanked Marc Puig, the previous president, for his outstanding work at the head of the Institute.

In his speech, he stated that Family businesses are “one of the key pillars on which Spanish civil society is based”. They are “the country’s companies”, “active motors of the modernization of Spain”, committed “to the construction of a better society”, promoters “of the ESG culture before the term had been coined”, leaders in many sectors in which “they compete with the best in the world, on a one-to-one basis, generating admiration and respect on the five continents”. This was stated by Andrés Sendagorta in his speech as the new president of the Family Business Institute, who assured that “we are not asking for favors nor do we want privileges”, but that “all of us, businessmen, employees, civil society, City Councils, Autonomous Governments and the central Government, should be united in a shared commitment: to make possible the growth, progress and continuity of family businesses as a sign and expression of progress, structuring and national prosperity”.

Sendagorta made these statements during a meeting of IEF members, who voted him into the position. Taking part in the closing session were the General Secretary of Spain’s People’s Party and spokesperson for the GPP, Cuca Gamarra, and the Minister of Inclusion, Social Security and Migration, José Luis Escrivá.

To them, to the Government and the opposition, the IEF’s new president offered “all the talent, the torrent of ideas, experiences, proven knowledge about the reality of our country, and of the world, that is in the IEF’s possession. Count on us for anything you need.” “We are,” he said, “at the service of building a country where people can coexist in freedom and prosperity.”

Andrés Sendagorta recalled that “our companies amass the creativity, initiative, perseverance and courage of people who, at some point, came up with a different idea to better serve a specific need of society. We call these individuals entrepreneurs. And it’s time for all of us to use the term entrepreneur by associating it with a connotation of creating economic value and social progress, giving the recognition they deserve to the many discreet and exemplary lives that we have seen in our families over the years.”

During the closing session, Fernando Ruiz, chairman of Deloitte, also spoke, presenting a series of figures on what the IEF is all about. Around a hundred of the largest family businesses in our country, which contribute significantly economically and socially, as reflected in a few figures:

No company in the IEF closed down due to the pandemic

And one conclusion that stands out above any other circumstance: despite the pandemic’s severe impact on economic activity, none of the IEF’s member companies has closed.

With all this information, according to Sendagorta, “we have enough authority to speak out and be heard.” In addition, the importance of a family business also has to be measured for what it represents “in our model of society. And any objective onlooker will conclude that a family business is one of the key pillars atop which Spain’s civil society rests.”

Sendagorta also wanted to highlight people as the focal point of companies. He recalled that family businesses “represent the effort and dedication of all those who, day in and day out, contribute to making our projects a reality. In family businesses, the personal and professional expectations of our workers and collaborators take shape and grow, from which they project their talent and fulfil their aspirations; as a result, the company turns into a shared project that connects, through vocation and necessity, with the heartbeat of Spanish society.”

“We are the nation’s companies”

“We are the nation’s companies. We experience first-hand the reality of our towns and cities. We understand the demands of Spaniards and have taken note and expanded them far and wide through our products and services all over the world. We have learned to compete and gauge the pulse of the entire world without forgetting our roots,” he said. They, Spain’s family businesses, “are world leaders in many sectors, competing on level terms with the best in the world, creating admiration and respect on all five continents.”

And in the same vein, he notes that “no one can credibly say they don’t care where a company is from. We are living in turbulent times. First the pandemic, and then the invasion of Ukraine, have reminded us of a lesson that we must never forget: the notion of corporate sovereignty exists in the same way and for the same reason as that of political sovereignty. We are open to the world, we uphold the culture of freedom, of international trade, which is a source of wealth and peaceful relations among the peoples of the world. But we cannot ignore or stop defending in particular the companies that make their decisions in our country.”

It is essential, he said, to “promote and defend Spanish companies. Without backward protectionism, but without dangerous naivete either. We will be stronger, more independent, freer, as a nation and as a society, if we have Spanish companies that look at the world from our shared past, with our values, with our rich culture, with our accent, with our approach to life. And that is the true reflection of what we are, of what the companies in the IEF and our Regional Associations are. My goal, as the chairman of the IEF, is to impress the importance of preserving our business heritage upon public, national, regional and local officials. The importance for Spain to have robust, well-structured, modern family businesses.”

“We are not asking for favors or seeking privileges. What we are asking for is to be kept in the loop and be allowed to compete in the world with no burdens or disadvantages,” he said.

The new chairman of the IEF also wanted to showcase the commitment of Spanish family companies to building a better society by fighting against climate change and endorsing inclusive initiatives that guarantee equal opportunity. While acknowledging that “there is still much to do,” Sendagorta nevertheless pointed out that “I can’t help but say something that I hope you agree with me on: our companies were promoting the ESG culture before that term was even coined.” “We have in our DNA a legitimate desire to leave better companies, in a better world and in a better society, to the next generation.”

In keeping with this approach, he committed to paying specific attention during his presidency to an essential cause: promote initiatives that stand up for and enable work-life balance. “We want to improve the personal and family lives of all those who are part of our projects because we believe that this is the best thing for everyone as people, while also ensuring that this balance between work and family life allows us to attract talent that makes our companies more competitive,” he said. He also asked family business owners to pitch in “to put work-life balance policies at the forefront of our business priorities.”

“Marc Puig: We have resisted”

Sendagorta also expressed appreciation for his predecessor in the post, Marc Puig, who, in his farewell address during the private part of the members’ meeting, stressed the problems facing our society, as highlighted by the pandemic and the war in Ukraine. Despite this, “we have overcome all these problems together, supporting one another, sharing experiences and learning,” Puig said. For him, the conclusion is clear and unquestionable: “Despite the tough times, we have resisted, we have adapted and even improved our work,” he said. He also noted that every IEF company made it through the pandemic, “and I think we can be very proud of how we responded to this crisis, especially in terms of the demands and needs of our society.”

The importance of being good at what you do

To conclude his inauguration speech, the new president of the Institute, Andrés Sendagorta, offered a personal reflection. “I come from the north,” he said, “from that wonderful part of Spain that is the Basque Country. There, 66 years ago, two brothers, Enrique and Manu Sendagorta, founded SENER, the first Spanish engineering company. They taught me that a company’s ultimate raison d’être is to provide a service to society, and achieving this requires two things: being good at what you do, because if not you are a speculator, and making money doing it, because if not you are not a company.”

Andrés Sendagorta is a shareholder and the president of SENER, an engineering and technology group founded in 1956 that is present on five continents and which is recognized for its capacity to innovate and lead changes that guide the sustainable development of society. He is also the president of the SENER Foundation and, since May 2019, he has been the president of the Basque Family Company Association, Aefame.

He holds a degree in General Management from the IESE Business School (University of Navarra) and is also a member of the Governing Board of the Institute for Market Studies.

Andrés Sendagorta graduated from the Spanish Navy’s Military Academy as a lieutenant, junior grade in 1985. As part of his military career, he served as ASW officer on the frigate “Baleares” and, as a lieutenant, as a naval jet fighter pilot with an aircraft carrier rating (U.S. Navy and Spanish Navy). He has also held the following positions: Harrier jet pilot at the Rota Naval Base and the Príncipe de Asturias aircraft carrier; head of operations and executive officer; and lieutenant commander in the Spanish Navy.

Sendagorta was awarded the Grand Cross of Naval Merit in 2009, with white band.